The recent accident at Savar (on 24 April 2013) due to the collapse of a nine storey building accommodating five export oriented Ready Made Garment (RMG) industries resulted in the death of at least 1129 workers and injuring more than 2,000 has shaken not only the Garment sector but the whole economy of the country to a significant extent. It has huge long term impact on the economy, society and politics of the country. The accident has already raised many questions, both economic and non-economic, locally and globally.

Both stakeholders of the garments industries and people in general are aware of the massive growth of the sector since its beginning in the 1980s, but not many have a clear idea about the spatial expansion of these industries in the Dhaka Capital Region or elsewhere in the country. The Centre for Urban Studies participated in a regional study supported by the Asian Development Bank (ADB) in 2010-11, on Clustered Cities Development, focusing on Dhaka, Delhi and Colombo. The Dhaka study looked at the industrial development pattern of the Greater Dhaka Urban Region (GDUR) . It involved mapping of all manufacturing industries with 10 or more employees classified as macro industries by the Bangladesh Bureau of Statistics. There were 15,562 such industries in the GDUR in 2009. The industries were mapped at union level.

This paper basically presents two maps, one of all manufacturing industries and the other of only garments and textile industries to give a visual impression of the distribution of the manufacturing industries in the Greater Dhaka Urban Region. The maps were prepared for the Clustered Cities Development study conducted by Professor Nazrul Islam (Team Leader), Professor Nurul Islam Nazem, Professor Amirul Islam Chowdhury, Professor AQM Mahbub and Architect Salma A. Shafi assisted by Anwar Hossain (currently, Lecturer of Department of Geography and Environment, Dhaka University) and others (ADB-CUS, 2010).

Like Many other developing countries Bangladesh has been experiencing a rapid economic growth in the recent years due mainly to the factor of globalization. During the last two decades, economic structure of the country has been undergoing a change, from mainly agriculture to manufacturing and services. In 1980 the contributions of agriculture, industry and service sectors to GDP were respectively 33.2%, 17.1%, and 49.7% (BBS, 2000), but the contribution of agriculture declined to 19.84% while industry increased to 28.92% in 2008-09 (BBS, 2010).

In spatial context, industrialization is an urban phenomenon because urban centers have the advantages in location, finance, infrastructure, transportation, and management services.

The Economic Census of 2001-03 shows that 37.4% of the country’s industrial establishments and 48% of the total industrial employments were in the urban areas in 2003 (BBS, 2007) while in areal context urban areas covered only 7.2% of the total area of Bangladesh. Although urban areas accommodate most of the industrial activities, the concentrations of industrial activities are very high in the large urban centers. Among the 532 urban centers of Bangladesh, only top 10 urbanized districts contained 57.65% of industrial establishments and 67.39% of employments of the national urban total in 2003 (Hossain, 2011).

The Greater Dhaka Urban Region (GDUR) has the largest concentration of industries in the country comprising more than one fourth of the country’s industrial employments (BBS, 2008). The share of Dhaka district in industrial establishments and employments were 9.7% and 16.8% respectively. According to number of employments, three districts of Greater Dhaka Urban Region were in top 5 positions in 2003 where Dhaka district ranked 1st and Narayanganj and Gazipur ranked 3rd and 5th respectively among 64 districts of Bangladesh. 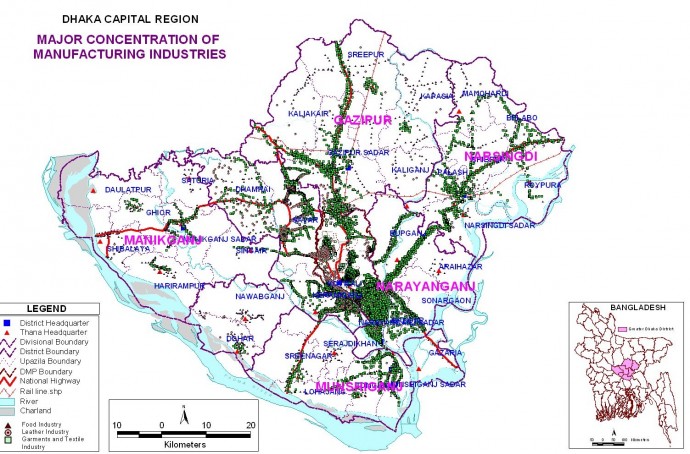 In the last two decades growth of industries in the core city area has declined but it increased very significantly in the periphery regions. Growth rate of macro industries in Greater Dhaka Urban Region was 2.3% per year and growth rate of employment was 4.1% per year (BBS, 2010) from 2004 to 2009. Growth rate in Dhaka district was lower than the average growth of the Greater Dhaka. It was respectively 2.3% and 1.9% per year. On the other hand, growth of Gazipur and Naryanganj is very high and more than twice than the average of the region. 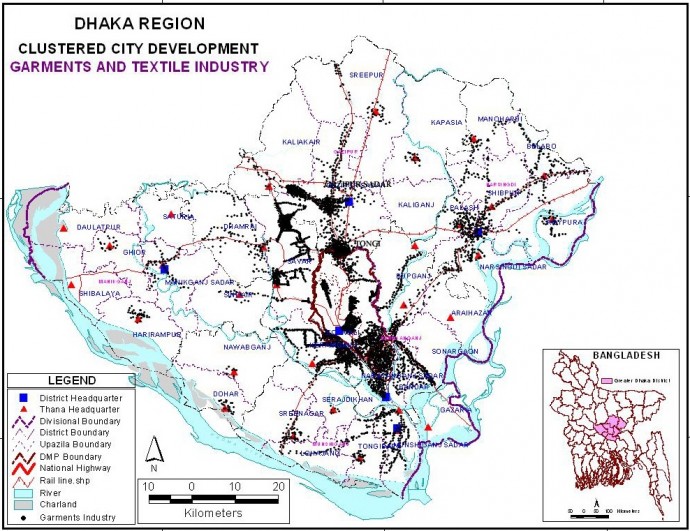 The DMDP Structure Plan (1995-2015) of RAJUK claims that, policies for manufacturing industry derived largely from the locational tendencies which have prevailed over the past twenty to thirty years in Metro Dhaka. These tendencies have reflected market forces and the choices of individual private sector interests and companies. But in the Plan, RAJUK did not delineate any industrial area in those regions where individuals and investors tend to establish industries. Although two Export Processing Zones (EPZs) for foreign investors were established in Savar, other peripheral areas where local investors set up their industries remain totally unplanned. Due to better transport networks and easier access to business support services in of Dhaka, industries tend to grow along all the national highways of the Dhaka Metro Area. This trend of industrial growth continues.
As contrast to the generally unplanned Post-independence urban and industrial development, the industrial growth was supported with planned industrial towns, such as Tongi or segregated industrial areas or zones within Dhaka city, such as Tajgaon or Shyampur in the Pre-independence period. The Post-independent planning and urban development authorities have failed to keep pace with the speed of industrial and urban development in this period. It may take several more years before RAJUK can prepare a revised plan for DMDP area. Meanwhile industrial expansion will possibly continue without proper area planning. At least the new industrial buildings should be built with professional design and standard. All basic compliance indicators for the use of industrial buildings must be satisfied. The alternative is the fate of ‘Rana Plaza’ 2013.