Towards an Urbanized Bangladesh: Looking beyond 2050

Ours is now an urbanized world with more than half of the planet’s population living in officially defined urban areas. Urbanization, as it is very well known, is a manifestation of economic, technological, social and political forces. Urbanization is itself a process with its impacts on environmental, economic, social and political structures of a society. Even within the same political-economic system, there are very efficient and highly livable cities and also very inefficient and unlivable cities.

Historically, the level of urbanization in Bangladesh has been low but it is urbanizing rapidly now. At the beginning of the last century, in 1901, only 2.43 percent (or about 0.7 million) of the total population of present Bangladesh areas of British India lived in urban areas. During the first half of the century urban population growth was almost static. In 1941, less than 4 percent of the population lived in urban centres, the total urban population was 1.54 million. Urbanization received impetus after 1947, when the Indian subcontinent became independent of the British rule and Bangladesh, then East Pakistan, earned a new political status as part of Pakistan. Since then a change has been observed in terms of the growth of urban population and also of urban centres.

The total urban population rose from 1.83 million in 1951 to about 2.64 million in 1961 (Table 1). The important factor responsible for this rapid growth was a large scale migration of Muslims from India after 1947, who mostly settled in urban areas. A phenomenal growth took place during the 1961 to 1974 period, the increase being as high as 137.6 percent. The growth rate was 6.7 percent per year during the period as against 3.7 percent per year in the previous decade. This rapid urban growth is largely due to migration of people from rural to urban areas. The rural push factors, caused by economic impoverishment following the liberation war and environmental disasters contributed significantly. Rate of Natural growth of population was also quite high.

Table 1; Growth of national and urban population in Bangladesh 1901-2001

In 1974, urban population increased to 8.9 percent from 5.2 percent in1961. In1981 this rose to 15.5 percent. The inter-censal change during this period (1974-81) was 110.7 percent with annual growth rate of about 10 percent. Like the previous decade both migration and natural growth partially contributed to this growth. But the most important contributory factor for the 1974-81 period was the redefinition of urban places. The extended definition of the urban area with the inclusion of all 460 Upazila Head Quarters as urban accounted for 30 percent of the total increase in urban population during this period. This indicates the role of political administrative decision in shaping the quantitative demographic status of urbanization rather than quality of urbanism. During the 1981-1991 period – a slower growth of urban population, 5.4 percent, has been observed compared with the previous decade. At about 20.0 percent level of urbanization the total urban population was 22.45 million in 1991 and that at 23.1 percent level, the total urban population rose to 28.6 million in 2001. Only the total population figure is available so far for the 2011 census, this (in the revised count) has been stated to be 150.4 million. With an estimated level of urbanization to be 28 percent, the total urban population would be approximately 42 million.

Bangladesh: An Urbanized Country by 2050 ?

All these population figures for the future seem nightmarish for a country of the size of Bangladesh. The urban population, at 42 million today, already poses a huge challenge, to think about double or triple of such size is very difficult. Indeed, the whole of Bangladesh is likely to transform itself into an urbanized country, a megalopolis of over 200 to 250 million people with a huge megacity in the centre and hundreds of other cities and towns spread all around (Fig. 1). 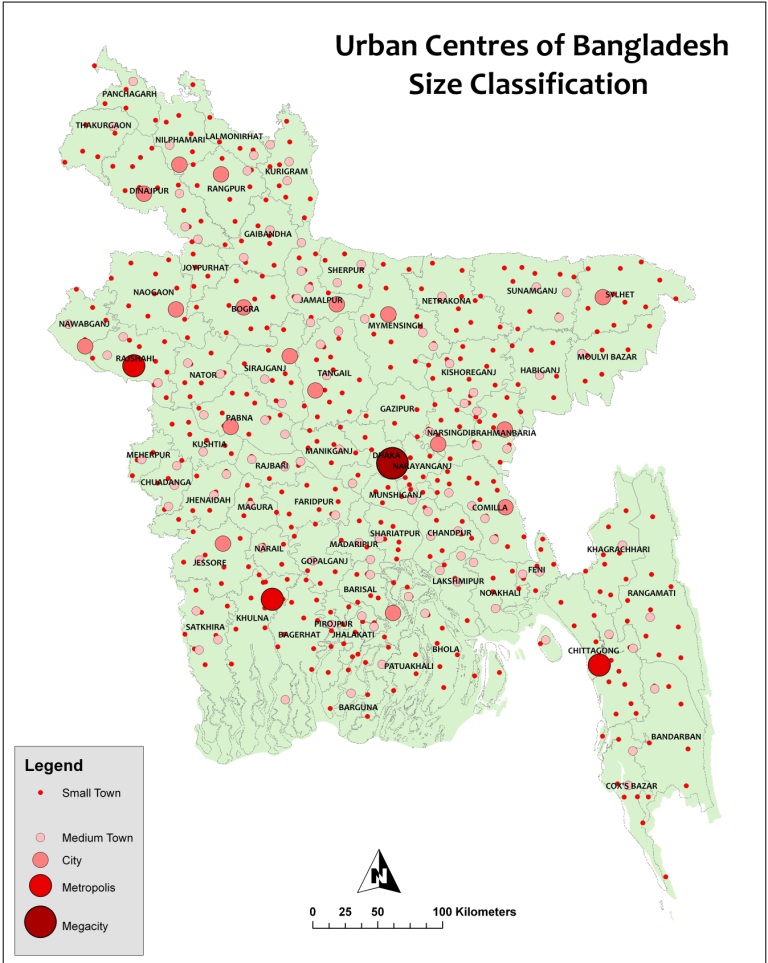 The urban system in a country is composed of a hierarchy of urban centers by population size, such as from the Mega/ Metro City to a small hamlet. Although urban geographers would prefer to classify urban centres in Bangladesh in 7 size classes (Islam & Hossain, 1976) the classification given by the Bangladesh Census Commission is a combination of population size and administrative or governance structure. The Commission has classified the urban centres into four categories; such as the Megacity, Statistical Metropolitan Areas (SMAs), Pourashavas and Other Urban Areas. It recognized some 522 urban centers in the country in 2001 (BBS, 2003).

Dhaka Megacity : A metropolitan city with population of more than 5 million was termed as Megacity in the census of 2001. There is only one Megacity in the country, Dhaka, with an estimated current population of about 14 million. Even in 2001, Dhaka Megacity was not a single city, but an agglomeration of several, including Dhaka City Corporation (North and South) area, six Pourashavas and numerous Union Parishads or villages (Fig. 2). In 2011, two new City Corporations (Narayangonj and Comilla) have emerged, through merger and up-gradation of Pourashavas. Such administrative changes require new urban governance system. Dhaka Megacity or Dhaka Mega-urban Region) in future will demand a very different governance structure. Governing the megacity region is complex and difficult because of multiplicity of agencies involved in planning and implementation of different services to the people of the megacity region. 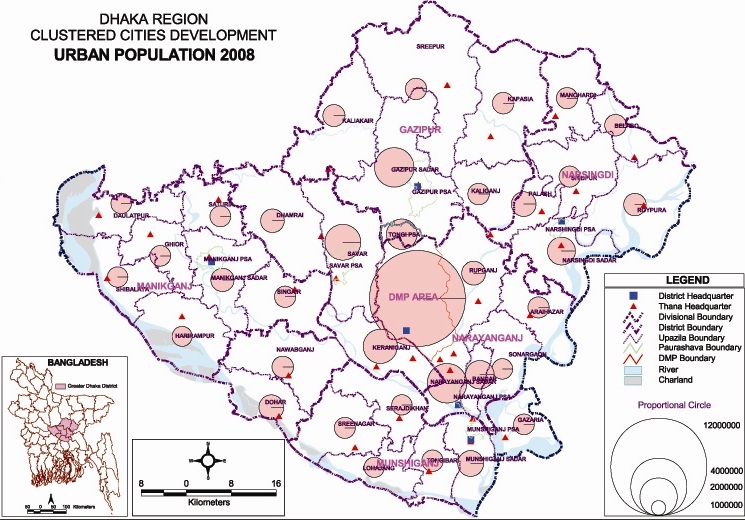 Statistical Metropolitan Areas are the City Corporations and their adjoining areas with urban characteristics. On the basis of this definition BBS (2003) identified three Metropolitan areas in the country in 2001, namely Chittagong (3.38 m), Khulna (1.34 m) and Rajshahi (0.7 m), besides Dhaka, which is a Megacity. These three cities had total urban population of 5.42 million, or about 19 percent of the national urban population in 2001. The Megacity Dhaka and the three Metropolitan Cities together absorbed about 56.44 percent of the total urban population of the country. Metropolitan Cities are given the status of City Corporations. The next category of towns is the Pourashava. The areas declared by the Ministry of Local Government, Rural Development and Cooperatives as Municipal Towns or Pourashavas have the formal urban status with local governments. During the Census of 2001, there were 223 Pourashavas in the country. In the same census, 11 Pourashavas were parts of the four largest cities – Dhaka, Chittagong, Khulna and Rajshahi. The remaining pourashavas, 212, had a total population of about 9 million, or 31 percent of the national urban population. Currently the number of Pourashavas is about 315.

Other Urban Areas are upazila headquarters or big market places in the rural areas which have not yet been declared as Pourashava during the census operation. The areas which conform with urban characteristics were considered as Other Urban Areas (OUAs). OUAs nearly, about 200, absorbed less than 4 percent of the national urban population.

Although Bangladesh shows low level of urbanization even in the second decade of the 21st country, the urban system, i.e, distribution of urban centres by size, offer potential of developing the system into a geographically balanced pattern. Such a system will be composed (i) of the Capital (Premier) City Dhaka, the mega city, incidentally located almost centrally in the country, and the cluster of cities and towns around Dhaka, (ii) a second large metropolitan city an emerging megacity, Chittagong, (iii)  regional metropolitan cities in each of the other divisional headquarters, (iv) the district headquarters as secondary or medium size cities, (v) the upazila headquarters as small towns and (vi) other smaller urban centres as compact towns or rural towns. In the longer term, the present nearly 5000 Union-Parishad centres will emerge as (vii) rural service centres or growth points. It is not unrealistic to vision Bangladesh as a predominantly urbanized country with more than half of its population living in urban places, ranging from rural towns to the meta city, Dhaka with population over 30 million, in a matter of just another 40 years.

The urban pattern or system in Bangladesh has already assumed a concentrated or agglomerated character. The Asian Development Bank has recently labeled it as Cluster-based urban development around one or more megacity/cities, as is demonstrated by Dhaka, a mega-urban agglomeration (Choe and Roberts, 2011). An urban planner has suggested a Transit Oriented Development (TOD) for Dhaka Mega City Region. There has also been suggestions for urban development along major corridors, such as the Dhaka-Chittagong highway corridor or Dhaka-Sylhet, Dhaka-Mymensing and Dhaka-Rajshahi, or Dhaka-Khulna corridor, etc.

However, the future of Bangladesh needs to be visioned as a sound mix of urbanized areas and rural-agricultural spaces. This will require zoning of agricultural lands and very strictly maintaining its status as such. At the same time, forests, hills and water bodies and wetlands must be conserved faithfully. Since Bangladesh will have a much larger population in the future, the need for planning for high-density settlements, obviously urban type, but environment respecting will be paramount.

Because of density and high proximity to any one of the existing urban centres, some 315 of which are already municipal towns or cities, almost all rural habitats in Bangladesh will ultimately assume an urban character, service wish specially and possibly even culturally conversely urban society in Bangladesh will have many of the rural social traits. The future urban reality in Bangladesh will possibly be something quite different from that anywhere also with world.

Islam, N.  and H. Hossain, 1976. ‘Relationship of Urban Centres with their Rural Hinterlands, in National Report on Human Settlements, Dhaka: Government of Bangladsh.

Mahmud A., 2012, “Rajuk’s Capacity in Plan Implementation and Development Control of Dhaka City,” (New Age, Special Supplement on For a Livable Dhaka, April 23, 2012).